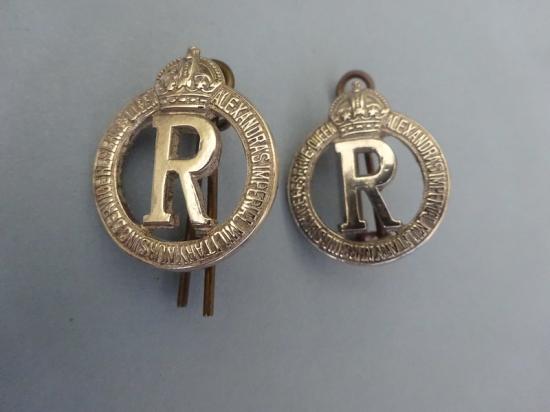 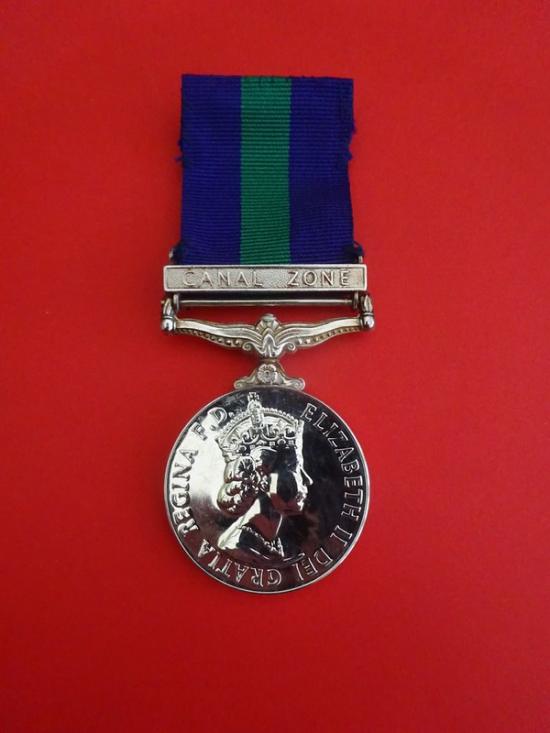 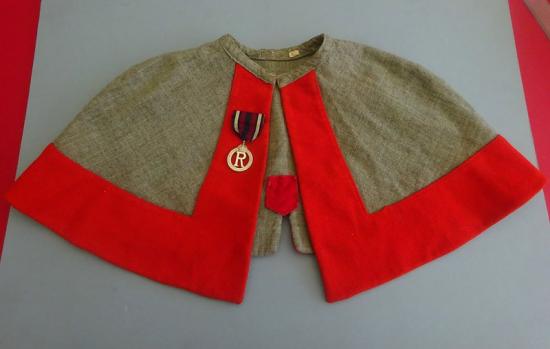 An original rare WW2 period nurses tippet for the Queen Alexandra's Imperial Nursing Service Reserve along with the original silver tippet badge/medal for 1942.
Whilst the standard QAIMNS tippet (or cape) was of a scarlet material, that of the Reserve was in grey with a scarlet edging.This tippet is made from a flannel type material and the scarlet edging has a small Alexandra Rose at th... read more 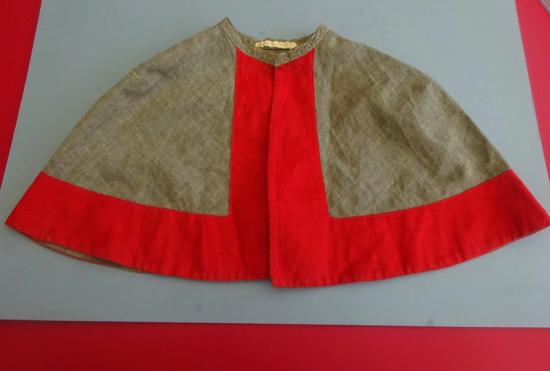 An original rare WW2 period nurses tippet for the Queen Alexandra's Imperial Nursing Service Reserve.Whilst the standard QAIMNS tippet (or cape) was of a scarlet material, that of the Reserve was in grey with a scarlet edging.This tippet is made from a cotton material and the scarlet edging has a small Alexandra Rose at the back.In good overall condition with no signs of damage or holes.There i... read more 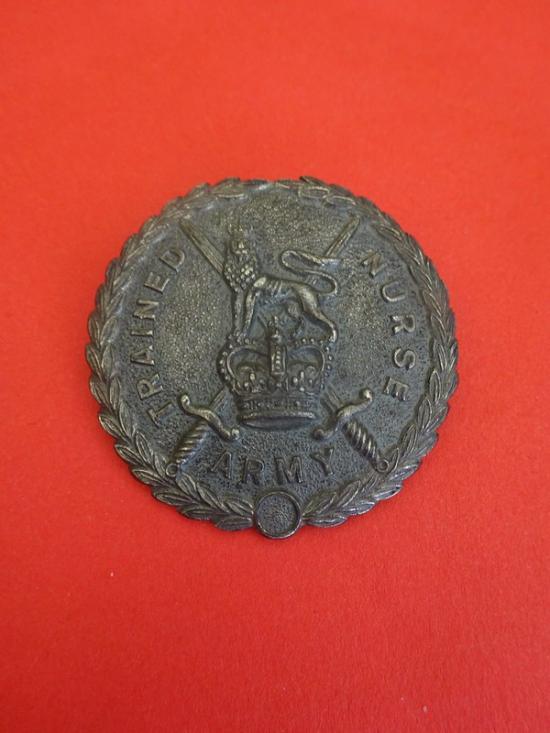 Another Trained Army Nurse Badge, which are always in demand. It features a crowned Lion atop a QE 2 crown in front of crossed swords.This pattern of badge was in use between 1956 and 1973.(often referred to as the Dustbin Lid due to it's size).Made of a pressed base metal/pewter, this pin is original and in good condition .This is a slightly darker version than usual ,but there were several ma... read more 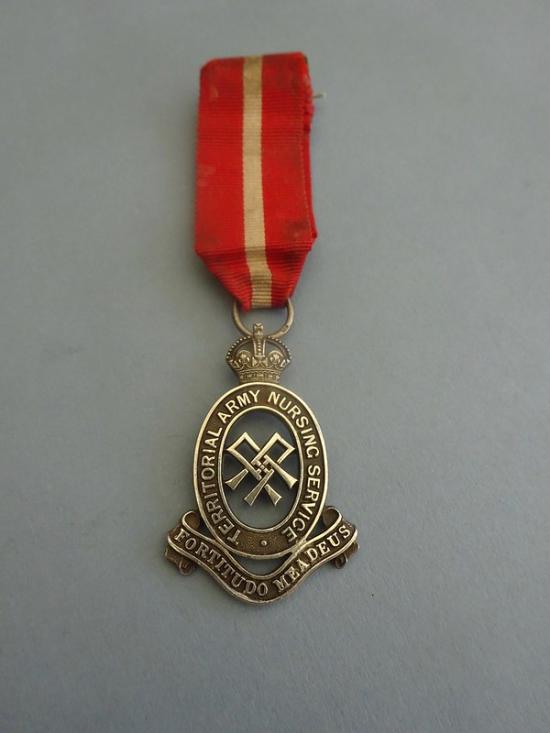 An original full size silver tippet badge; This pattern of badge was in use from 1920 onwards and consists of the intertwined A's of Queen Alexandra.The roll at the base carries the motto Fortitudo Mea Deus-God is my strength.The Badge retains it's original ribbon with only minor signs of wear.The rear bears Hallmarks for RJ London 1935.(This is for Robert Arthur Johnson,assistant director of t... read more 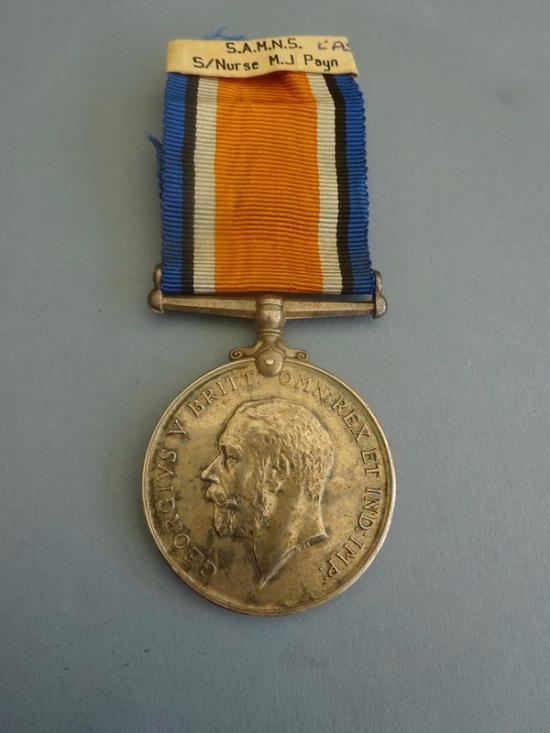 An original First Word War silver War Medal named to S/Nurse M J Payn.I have been unable to trace this particular nurse and believe she may have served with the South African Military Nursing Service.
See pictures for more details read more 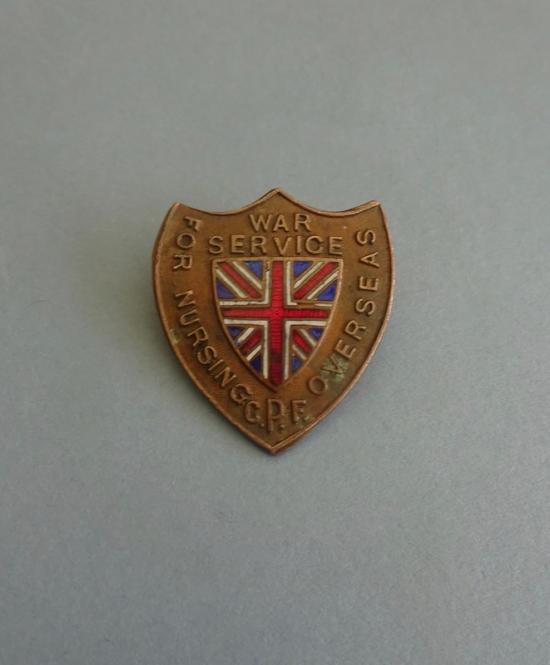 A rare Canadian brass and enamel badge from the First World War.Issued by the Canadian Patriotic Fund, a national charity from 1914 to 1919, the badge bears a shield bearing the union flag.Above this is War Service and below CPF .Around the sides of the shield is For Nursing Overseas.Good condition with no major damage. Pin and Clasp intact. Makers mark for TP Tansey Montreal and the number 30... read more 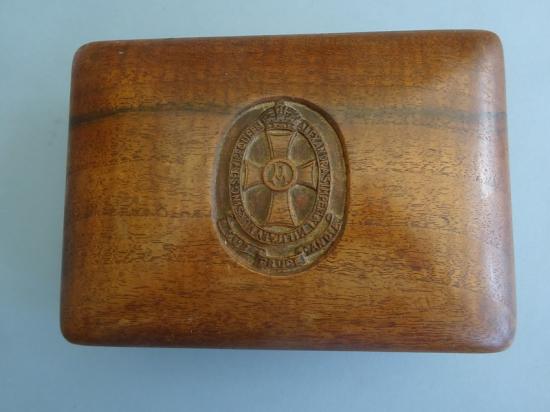 A carved wooden box, probably from the second world war period, with the emblem of the Queen Alexandra's Imperial Nursing Service, the Dannebrog cross. In a nice condition with no significant damage, the hinged box looks to have been used as a cigarette box. At 170mm by 120mm, and 55mm tall with a domed top, it may have been a souvenir of service, probably in the Middle East. read more

A scarce bronze tippet/cape medal for the Queen Alexandra's Imperial Military Nursing Service,the forerunner of todays QARANC.
The open work design features the Danish Dannebrog cross with an A for Alexandra in the centre.Around the edge is the title.This is topped by the Imperial Crown which is suspended from an red,white and blue silk ribbon.
This pattern of badge was in use fro... read more